Located in Mount Vernon, one of Baltimore’s most historic neighborhoods, we fabricated and erected structural steel and miscellaneous metals for the conversion of a former nightclub into this innovative and modern 37,000-square-foot, eight-story work/retail venue known as City House Charles. 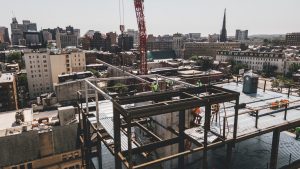 With seven stories of floor-to-ceiling windows and new mixed-use Class A office and ground-floor retail space, the project will set a new standard for converting historic properties into attractive and highly-desirable business and leisure accommodations.

New construction or a renovation?

Because of the extreme site constraints – tying-into two stand-alone walls and abutting existing buildings – this project felt a lot like a renovation. Existing historic buildings are located to the north and east. The building that previously occupied the site was demolished, with the exception of two brick walls at the corner of North Charles Street and Eager Street. The walls are being incorporated into the new building and had to be shored and stabilized before we could attach the new steel. Ensuring the free-standing walls remained erect and plumb was the first of many challenges we faced on this project. 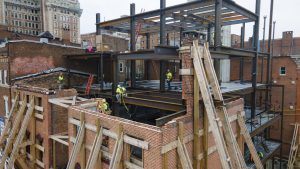 Being a part of the solution, not the problem

All jobs have their challenges but this one really tested the team. From the tight site and renovation-like conditions to excessive groundwater, this project required patience, out-of-the-box thinking and increased precautions. For example, as the general contractor was digging out the new building’s basement, the foundation of an adjacent building sunk about 2.5 inches. As a result, our prefabricated steel beams no longer fit in the provided area. Crews had to field-modify the beams, reducing their lengths, in order to make the structure work.

Due to the tight site, we utilized a portable tower crane because of its smaller size, quick setup time and improved operator line of sight. The team also used two tag lines in lieu of the typical single tag line so we could better control the beams. This provided improved accuracy and control when maneuvering the steel between the existing buildings and when tying into the stabilized walls.

While the project required only 276 tons of structural steel, we broke our erection sequence into 26 parts. By increasing the number of deliveries, we minimized the amount of steel located on site to only what could be erected in a single day. Despite our good planning, the general contractor ended up utilizing the little space we were allotted for laydown. Once again, we had to get creative. After completing the decking on the western portion of the building, we began erecting steel in the center, which we had been using for daily laydown. Because the contractor was utilizing our Phase 2 laydown area, we staged the steel atop the completed structure, which kept the project moving forward.

Moving toward a happy ending

Despite all of the project’s challenges and complications – a tight site, tying into existing walls, sunken foundations, etc. – Mitch Noll, project manager, and Gerardo Madrigal-Lupian, foreman, kept their cool and utilized their expertise to lead the Steel crew to a solution for every problem thrown at them. They continue to meet each challenge head-on, keeping this 37,000-square-foot, eight-story work/retail venue moving toward its December 2021 completion. 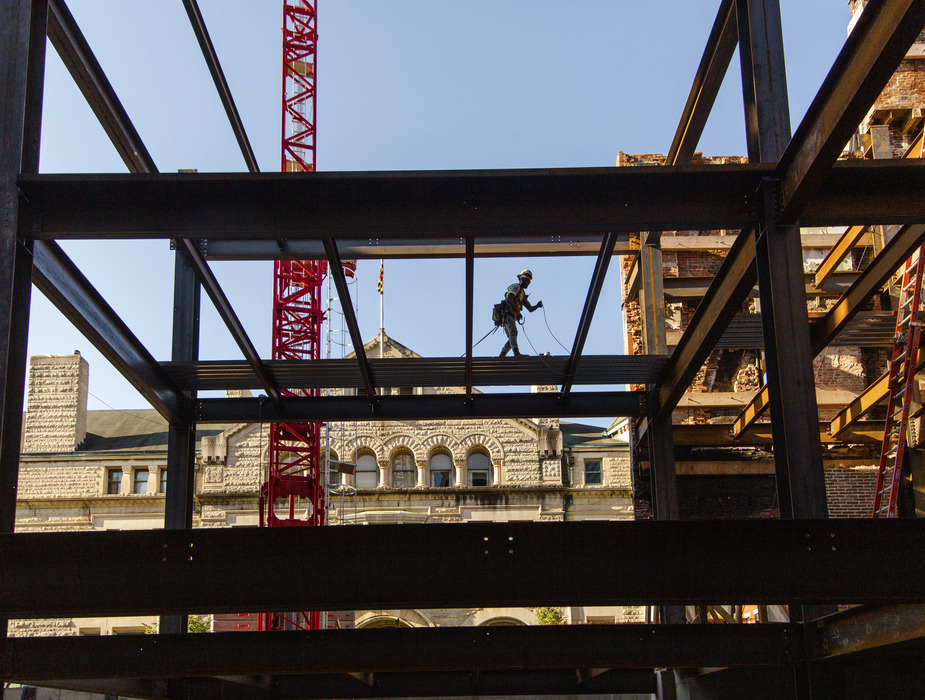